Below are the four photographs to complete my New York album.  Having originally uploaded the pictures to my Facebook account, and sending them off to snapfish.co.uk, I realised that I hadn’t actually saved the photographs to my laptop.  Hence, taking so long to put this page together.  After searching round my house for something else entirely, I found the wallet with the rest of the snaps. 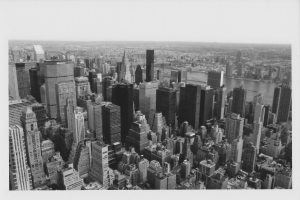 Both were taken using the Canon digital compact camera.  I had zoomed in on the second photograph.  Sometimes, I dearly wish that I had my DSLR with me for this trip.  Whilst the photos may not be correctly exposed, I love their overall composition – certainly following the “rule of thirds” here.  The next two photographs were taken around Harlem, albeit whilst on the hop-on, hop-off bus. 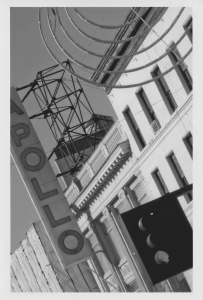 View from the tour bus…the famous Apollo Theatre in Harlem

I was impressed with the result of this photo, taken with literally seconds to spare whilst stuck at traffic lights.  For the last couple of years, this photo has been proudly displayed upon the wall of my landing, framed as part of a montage.  I love the curves of the decorative streetlights in the top of the frame against the rectangular shapes of the signs, windows, and traffic light.   The final photograph was also taken in Harlem, and how small the pedestrian in the foreground, appears against the shadows fall falling directly onto the buildings behind.  Can you spot the other pedestrians? 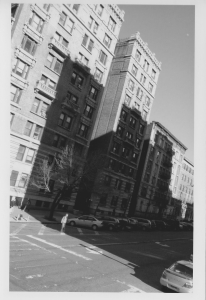